For what’s to come.  Nothing major, but it’s almost February, which means I will disappear.  Because if I stick around, it’s not pretty.

February is everything horrific in my life.  My mother and grandmother died 3 days apart in 1985, and while my relationship with my mother was absolutely rotten, I adored my grandmother, and the events that led up to them both being in the hospital…were complicated, and to this day I feel some of it is my fault, although what happened with my grandmother probably would have happened anyway.  I’ve learned a few things in the intervening years.  Most of them don’t alleviate the guilt.

My dad died February 10th, 1995.  At least I had good friends around me at the time, but that one still tears me up.  I was 30.  And that was the last of my family, leaving me pretty much alone.  No one on my father’s side has bothered with me since.

And it’s been years since I had any significant other.  Why would I, with my terrible self-esteem and anti-social tendencies?  Very rarely do I dress up and use makeup, and when I do, I’m so nervous and uncomfortable, I feel physically sick.  Part of me knows that I’m almost actively driving people away to keep my safe zone.  But February is…wait for it…Valentine’s Day, a reminder of that which I don’t, and likely will never, have.   And it’s a reminder of people who have abandoned me once they found significant others, because some people can only have one intense relationship at a time.

(And I’m talking friendship.  Some folks can be married or in a relationship, and keep their friends.  Some can’t.  It’s cool.  And when I say abandoned, that’s just how I feel.  I suppose I haven’t really been abandoned, but that’s my perception).

And finally, it’s the dead of winter.  Maybe not on the calendar, but in my head.  It’s the coldest.  The snowiest.  The bitterest.  It’s like there’s no end in sight, because at least in March, you have some mild days.  Yes, I succumb to seasonal depression, altho vitamin D is a legit help, and it is at its peak in the shortest month.  Worse, I had truly hoped that I would not be in this area for another winter, but that fell through…and here I am.

I’m not looking for sympathy or kind words (hey, fellow anxiety/depression/poor self-esteem sufferers, don’t kind words always make us feel worse?).  I’m just letting people know what happens in my head, and why I withdraw for a good 30-40 days.  I do always come back.  Usually better, but with another situation looming over me, like pending unemployment, I’m not so sure.

More importantly, with that out there, I want you to think of your other friends.  I gave you some details, but not all, but maybe if someone else you know has disappeared for a while, they may be having similar problems.  Winter is bad for a lot of people, even if they aren’t in the craptasticly cold Northeast.  Maybe you should check on them, and certainly you should be understanding.  Eh, maybe I’ll get some writing down during my hermitage (is that a word?  spell check didn’t grab it…)

OH YEAH!  And one more thing about February…the groundhog!  He’s a fraud, a charlatan, a tease! 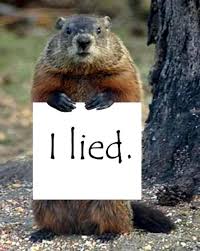