I admit, I’ve not gone very far in.  Not deep enough to find the desecrated statues (one headless, one with no head or hands).  Some of that is fear, although admittedly, more fear of the law than of ghosts.  And a tiny bit is fear of ghosts, only in that the cemetery is so insanely overgrown I would be hardpressed to make a quick exit if needed.

The one time a couple friends and I did venture in, it was just weird enough.  My one friend and I both felt pressure.  Not scary, but uncomfortable, as if something were wrong, a squeezing around the temples, a band of pressure around the chest, but not so tight it affected our breathing.

The few graves in the front are nondescript.  We just checked out the receiving tomb.  I’d love to see a color picture of that when the roof was intact…hell, when the whole thing was intact.  I imagine it was probably beautiful.  On that hazy summer afternoon, with sunlight slanting thru the ruins, and sparkling dust motes about, it was still beautiful, despite the attempts of some idiots to be cool by painting “evil” symbols on what’s left standing.

The pictures I took (regular camera, not digital) in this tomb didn’t come out.  Not one.  My friend only took a couple, too, but those came out, and one of them shows a huge pink orb over me. 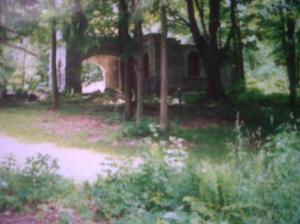 I think I took the second pic, from behind the tomb, where the path starts to get really overgrown.

We left shortly thereafter, although our 4th friend, who stayed outside the gate in the car (sort of acting as a ground for us), noticed as we were walking out, all the shadows shifted.  From inside, it only looked like the sun dipped behind a cloud and it grew darker; apparently it was more ominous looking in.

Less ominous was when we drove by a few weeks later, to see a bright yellow Port-a-potty sitting in the cemetery.  They were doing some cleaning or renovating, and I suppose they needed somewhere to go when they got the shit scared out of them.